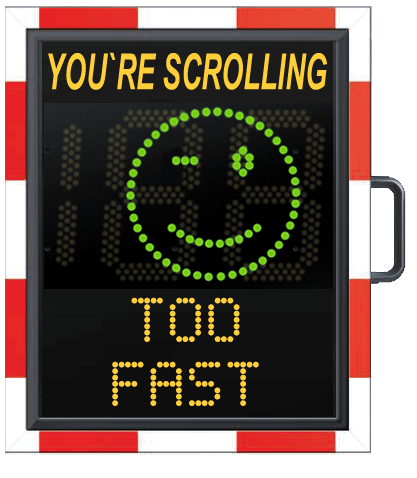 Children are easily overlooked in urban traffic. Excessive speed, especially at pedestrian crossings and near children’s daycare centres and schools, is one of the most frequent causes of accidents. A speed display is an effective alternative on roads where traffic-calming measures like road narrowing, planters or green lanes are not feasible. Erecting mobile or stationary speed displays is a preventive measure that is the first step on the way to increasing road safety.

via traffic has been manufacturing highly efficient speed displays that increase road safety in residential areas, 30 km/h zones and school routes since 1989. Speed display panels that influence traffic speed, thereby helping to ensure that maximum speed limits are observed, are deployed especially in areas around schools where children cross the road at crossings with poor visibility.

Road users on company premises include employees, visitors, customers as well as delivery personnel. These groups of people often fail to see a company's premises as a normal traffic area. A recommended speed of 5, 7 or 10 km/h is often prescribed for airports, customer car parks and company premises. In contrast, the maximum permitted speed in built-up areas is 50 km/h (according to German road traffic regulations – StVO). This figure falls to 30 km/h on roads with traffic calming (30 km/h zone). The common problem, however, is speeding.

For this reason, it is important to install signs and the measure and monitor speed direct at the entrance to the company’s premises. LED speed displays make a major contribution to calming traffic at the gate, at danger spots on the premises (zebra crossings around the canteen) and in loading areas.

For this purpose, it is also possible to use a full-matrix viasign display to give drivers feedback in the form of text and an image indicating the speed at which they are driving in addition to deploying viasis speed displays.

Speed displays for use on motorways

Speed display panels with large digit heights and powerful diodes are ideal for use on motorways and main roads. Dangerous areas in particular such as motorway construction sites are often equipped with speed display panels in order to make drivers aware of the speed limit and to reduce the number of accidents. The use of dialog displays like viatext:, which shows a variable LED warning text depending on speed, have also proved to be effective.

Would you like to know the volume of traffic on your roads? At specific times? Then get to know our viacount II traffic counter.

Any questions about viasis?
Please call us

“Children need special protection – this is also important in road traffic. Special precautions are especially important near primary and nursery schools. (...) Until they reach the end of primary school, children are unable to properly judge general dangers in road traffic and in particular the speed of approaching traffic.”
German Transport Minister Alexander Dobrindt

viasis (stands for: via “speed information system“) refers to an innovative and radar-based information system for road traffic and road users. It identifies a speed display equipped with modern radar technology that increases road safety. The main elements of the product comprise a powerful LED, a flexible mounting and a data capture system for storing and transmitting traffic data. The viasis speed display from via traffic controlling shows emoticons (with smiling or sad faces), speed limit symbols and LED digits that serve to provide drivers with feedback in real time about the speed at which they are driving.

*Data may vary depending on model

Which viasis model is right for my application?

What does a viasis speed display cost?

Where should the speed panel be set up?

What analysis options does the viagraph software provide?

What mounting options are available?

May I, as a private individual, operate a speed display?

Send us a message »